Progress: til there's nothing left to gain

I know my tens of readers are interested in how I create these wondrous works of mediocrity-well your wait is over! here is a step by step exercise in futility: 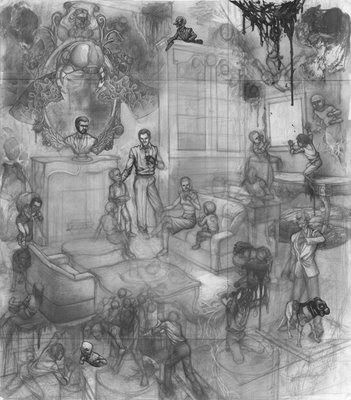 Well, here is step one, a fairly incomplete sketch with all the structural details laid out, except for the fact that all the figures on the bottom are way too small and the perspective on the cabinet and the picture frame are way off. It was fairly big, around 30" x 36" and I shrunk it down to fit on a 24" x 30 ish" etching plate. I started working on it and noticed all the horrible inconsistencies, now to fix them. This first diagram is fairly inept, and quite frankly, lazy, so I set out to do another one. 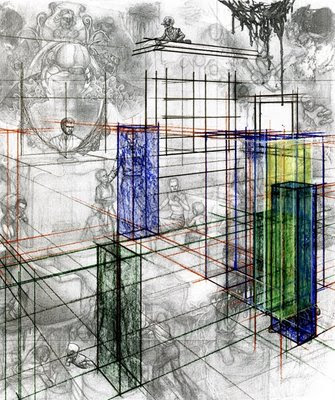 The second diagram is just too arbitrary. I didn't make the proper measurements to insure that the grid size was constant, i.e. the squares on the floor that mark the space where a human would stand are too wide in the front relative to their size in the back. I made colored blocks to represent a roughly human sized shape corresponding to the grid. I put them in spots relative to the most noticeably incorrect figures. I did correct the shelf and the picture frame. 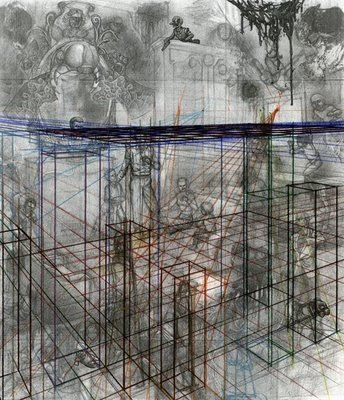 Here's the one that worked. Good old mathematical perspective properly measured and diagrammed. I tried to use different colors for the different levels and planes of view. I started with the red for the living room floor and the blue for the "ceiling" of the main figures heads. From there you just draw lines from the eye level of the composition to the corners of the squares and build your grid from there. Once the primary figure is mapped out on the appropriate plane It is the simple (but tedious) task of moving the grid up and down with corresponding proportions. I drew the boxes close to where the figures were and used them as a measuring device. 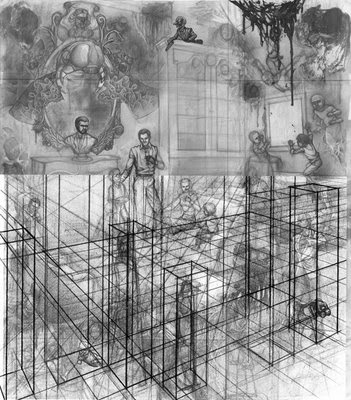 Good old Photoshop. I superimposed the grid on the original and went about grabbing the figures and resizing them. I had to rotate and rebuild the ones that are hunched over but it seemed to work. 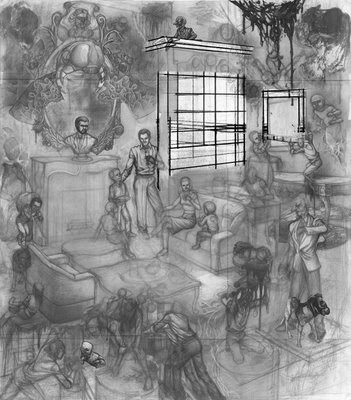 TAA-DAA! It only took a day and half to correct mistakes I should have noticed months ago. That's why I'm such a little prodigy. Now all that's left is to fix the ham fistedly drawn clothing on the figures I just resized and I should be in business for months of etching fun. Hopefully this self-defeating rant will brighten your day and serve as a cautionary warning.

I feel sort of embarrassed to be posting half finished sketches, but yeah, whatever

By they way I'm really sick of all this goddam Michael Jackson bullshit.
Posted by Marcus Howell at 1:20 AM

Well now you can just think about Billy Mays instead. There he goes stealing all of MJ's thunder.